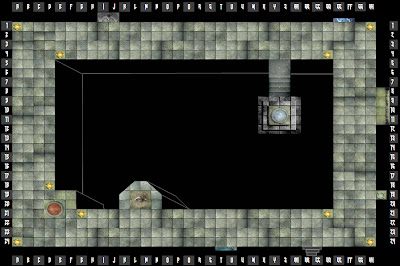 Bone chandeliers dangle on rusted chains from the high vaulted ceiling of this long ambulatory.

Candles made from human fat burn perpetually in iron candelabrum set into the brimstone walls.

Canals of lava a hand’s width across run along the base of the walls, casting a deep red glow across the uneven marble floor. Caution! Hot!


The air is thick with soot. The sound of hacking coughs and gentle sobbing radiates from some unknown hollow beyond the walls.

Thou finds a kaleidoscope of magical effects both wondrous and dangerous. Many of these items will be great boons to your quest, but require a commensurate sacrifice on a spiritual level.


T24 - U24
A full length mirror is set into the crackling brimstone walls here. The copper frame is etched with a proverb in the Abyssal script: “No beauty without envy, no love without jealousy.”

The full-length mirror is enchanted with a divination spell. A dungeoneer may incur 3 points of blight to ask thine own reflection to show any one object or creature in the Fane, even if they have not seen it before. 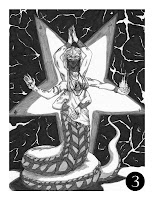 L19 - M20
The statue is of a six-armed, serpent-tailed demoness (pictured) that smells of lilacs.

The Heart of Khaldun is placed upon the statue's cupped hands. Immediately, trident sigils begin glowing on the surface of the statue and all dungeoneers are whisked away, magically transported to THE MOTHERS' CLOISTER.

D20 - E21
An obsidian fountain in the southwest corner of the ambulatory, hewn from translucent lapis lazuli stone in which quivering organs (livers, etc.) are embedded.

Th fountain is imbued with necromantic spells. Dungeoneers may drink of this fountain to gain temporary hit points equal to their healing surge value, but each time they do so, they incur 1 point of Blight.

A10 - A14
A rusted iron portcullis blocks access through a wooden archway clutched by black vines. Chunks of petrified demon princes lie strewn before the gate. Beyond, a courtyard of dead trees is visible beneath the fiery underworld sky.

A casual inspection of this grate makes you think that this could be easily lifted.


I1 - J1
The upper body of an angel has been crucified to the wall here. Gore cakes the wall, and its spine hangs down like a long chain. Thick frost covers the entire grisly display.

Pulling on the angel's spine activates a mechanism to rotate the wall and leads to the PRISON OF FROZEN GODS.


EE1 - FF1
The image of a succubus has been painted onto the wall here. However, the wall is open, two halves rotated away at the center of the succubus painting revealing a short passageway and stairs leading up.

This passageway leads to THE PLEASURE CRYPTS.


X9 - AA12
The teeth of pit fiends float in the grey water of this fountain. A marble idol carved in the likeness of a hooded figure wielding a trident stands in the center of the water.

Dungeoneers may drink of this fountain to gain an action point, but each time incurs 2 points of Blight.


HH8 - HH11
A huge square of rusted iron is bolted to the wall here. An ochre portal that reeks of acid swirls within the square.

This ochre portal has been enchanted, unsurprisingly, with teleportation magic. The portal ends in DEATH WYVERNS' CRUCIBLE. 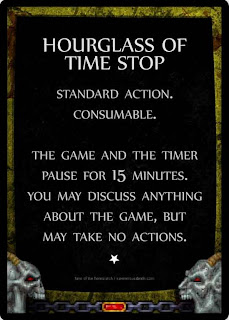 An hourglass-shaped keyhole is set into the otherwise featureless wall. Oros deftly opens the lock and gently pulls out a long steel drawer. The metal container is reveaed to contain the Hourglass of Time Stop.
Posted by Ross at 9:06 AM