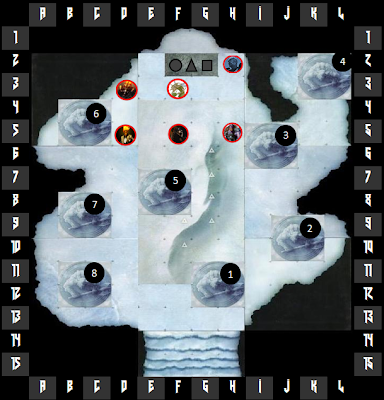 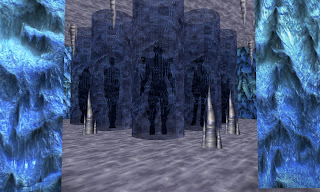 Monstrous black icicles drip from the low ceiling of this frozen prison, giving the room a cave-like appearance.

Eight crackling obelisks of charcoal-colored ice stand in a circle. A humanoid creature rests entombed in each.

A stone plaque on the north wall bears three carriage wheel sized shapes: a triangle, a circle, and a square. Some sort of runes have been etched into the plaque above the figures.

(1) Kishar, Goddess of Slaughter and Retribution: A blackhaired woman in bloodstained plate mail.

(5) Kotaresh, God of Trickery and Secrets: A vaguely-humanoid shadow wearing an upside-down mask.

(6) Euryale, The Maelstrom Queen: This creature appears much as a snake-haired, shark-fanged woman.

A hidden passageway is discovered wherein float the Wings of Wrath. They are claimed by Oros.

Kaddim boldly pressed the circle button to open yet another secret alcove, filled with treasures, including the Heart of Khaldun.

Nettle uses the first of the two salt spheres to free Kishar, earning the Boon of Slaughter for all (+2 to attack rolls).
Posted by Ross at 12:01 PM