To facilitate the style of game I want to play, I've incorporated a number of changes into the base Gamma World system. As with any kind of House Rule, care has been taken such that rules are not added in unnecessarily. Each new House Rule adds its own bit of complexity, coming in with a certain amount of negative impact to the game just by being there, by being a potential source of confusion and one more link in the chain that could break and send the whole system crashing.
Defense Rolls
Players make every d20 roll at the table, with the exception of skill checks in Chase Scenes.
NPC initiative and attack rolls “take 10”, producing an unchanging, static value that the player character must attempt to defeat. A roll of a natural 1 on a defense roll is an automatic failure and a critical hit for the attacking NPC.
For example
GM: Roll initiative! [dice clatter] Who got a 20 or higher? Very good! You’re characters seize the moment and get the jump on the robot ninja assassins.
For Example
GM: You see the reanimated remains of a long-dead soldier stumbling its way to you. Before you can react, it uses its rotting ringers to pull out the ring to a military-grade fragmentation grenade. With no though to its own wretched existence, the creature holds the explosive device and shambles towards you, its mouth agape and crawling with maggots.
Fast PC: My Fast Hero nimbly runs for cover behind some nearby cargo crates, gets low, and hopes her Kevlar vest stops anything that gets too close. [d20 roll] I get a 12 on the die, plus my bonuses (Level + Origin bonuses + Dex/Int mod + 3 for light armor), plus 2 for cover … 30.
GM: The explosion disintegrates the nazi zombie’s hand, sending sharp bits of metal all around. Luckily, the majority of the debris is soaked up by that crate you’re hiding behind, and the pieces that make its way through you are able to evade, thanks to you Fast Hero ability.
Strong PC: My turn is up. I rush into the fray and tackle the SS sorcerer off of the steel catwalk and into the boiling vat of acid below. [d20 roll] With everything I get a 25 against his Fortitude. Auf wiedersehen!
Languages
Something that I liked about my campaigns in d20 Modern was using their language system. By grouping all the hundreds of languages in the world into a few, easy to manage grouping, I can get a lot of utility out of a simple mechanic. This does go against my previously stated goal of reducing granularity, in that it adds a level of detail not previously seen in Gamma World, but I feel that the roleplaying paybacks on this are worth it. All characters can get the gist of information from someone speaking to them in a language they do not have fluency in, however intricate details (such as those required to read an ancient magic scroll written in Sanskrit), are only available to those with the highest level of language proficiency.
Languages Known: English, plus fluency in one additional language group per Intelligence modifier bonus (minimum 0).
Language groups are as follows; Classical (Greek, Latin, Egyptian), Semitic (Hebrew, Arabic, Farsi), Slavic (Polish, Russian), Pan-Pacific (Mandarin, Korean, Japanese, Tibetan), Native American (Navajo, Sioux), Germanic (German, Dutch, Norwegian), Romance (Italian, French, Spanish), Indic (Hindi, Punjabi, Sanskrit), Finno-Ugric (Finnish, Hungarian, Estonian)
No Cards
While I enjoy the wildness and unpredictability of the Gamma World card system for Alpha Mutations and Omega Tech, I feel like the level of flux doesn’t translate well for the type of Modern campaign I want to run. While I want things to be over-the-top, I also want the players to feel like their actions matter, that the game universe is a somewhat predictable place, and that they have a decent level of control over what happens in the story. The cards, unfortunately, do not facilitate this, and so I have redone almost all the random elements of Gamma World (cards, origins, skills) to a set of choices that stay with a character for their entire career.
Two Fisted Shooting 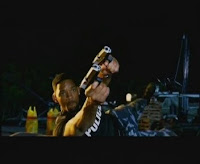 Each character receives 1 action point per encounter. An action point may be spent as a No Action to either add +1d6 to a die roll you just made, or to reroll a die roll you just made.
I've added Action Points into 4E Modern, noticeably absent from Gamma World, to give the players a certain level of control over the narrative. I stepped away from the 4th Edition D&D convention of Action Points adding an attack* and went back towards something closer to how they were handled in the original d20 Modern.
One of the problems I had running d20 Modern is that players would see Actions Points as a resource that could be saved, hoarded, and would hold onto dozens of them. The problem here was that it negated the entire point of having Action Points, namely, to use them for action! By putting them as a 1/encounter ability, I’m ensuring that they will almost always get used. By adding a potential for a complete reroll of a die, I’m now putting into play a choice the character has to make with these. When faced with a die roll they strongly want to change, they can either go the safe route with adding 1d6, or get bold and reroll the whole thing.
Lastly, by putting all attack rolls into the hands of the player, they now have narrative control over ALL attacks on the board. This brings another meaningful choice into the players field of vision: do you use your Action Point for offensive (your die roll) or defensive (an enemy’s die roll) purposes?
* Let’s be honest, no one uses AP’s to move. It's an extra attack.
Posted by Ross at 8:44 AM