Heroes in the modern world typically have access to a wealth of readily available goods and services that are unavailable to their medieval fantasy and post apocalyptic counterparts. Instead of random rolls on a the ancient junk table, Heroes in 4E Modern are able to take the maximum result (1d4+1) or the mundane items roll, and shop for what items they wish, in addition to picking out mundane armor and weaponry. In a modern industrialized world, characters can choose to buy literally anything they need for their current assignment. Anything prohibitively expensive (such as a car), or restricted by military licensing (such as a grenade), however, must be bought with a Wealth Roll. Wealth Rolls will be covered in a later post and are related to Omega Tech. Ammunition, gas, food, travelling expenses, etc. are not tracked and are assumed to be bought and taken care of “off-screen”, unless it is significant to the story.

Gamma World provides a great framework with which to base weapons off of. For a modern game, however, I thought a lot could be gained by providing more granularity here, although keeping far far clear of the kind of pointless detail that d20 Modern, and to a much greater extent Weapons Locker, provided. I split up each generalized category of basic weapon into three different components. I then fiddled around with the proficiency bonuses and damage types to give a bit of range and interesting choices to make for the players involved. Lastly, I chose different ‘Ammo’ effects based on the ammo rules, which really opened up a lot of possibilities and variance amongst the weapons, while at the same time satisfying the immersive aspects of having weapons act as the would in real life (or at least Hollywood). For example, assault rifles tend to have area burst ammo effects, in line with the autofire option of d20 Modern; whereas shotguns attack in a close blast.

You’ll notice many staple armaments, fragmentation grenades for example, are noticeably missing. They will be covered later as I have moved consumable items into the Omega Tech category.


No, it doesn't!
Looking at the straight-up numbers, you might be inclined to think this. But you'd be wrong. The knife, being both a melee and a ranged weapon provides excellent protection against drawing opportunity attacks and making opportunity attacks. Coupled with its increased threat range, and it is the perfect weapon for anyone wanting to recreate a "V for Vendetta" style character.

Yes, it does! You're glimpsing a little bit into my home game, as the spear stats are provided only as a foreshadowing to the epic Artifact that will be uncovered and fought over by campaign's end: The Spear of Destiny. 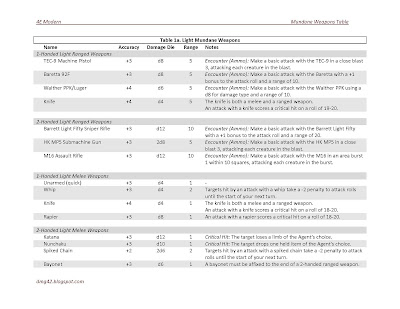 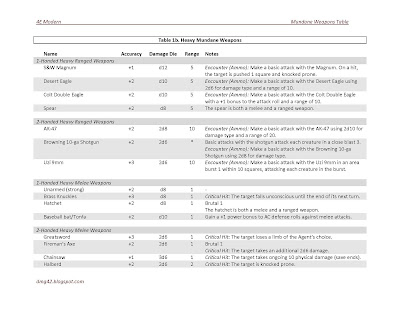